Family Planning Budget – Allocation and utilization in Bihar: An analysis of NRHM and the Family Welfare Budget 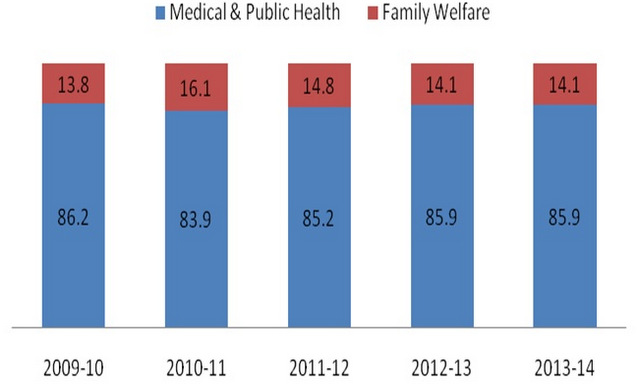 The main objective of the study was to analyze the trend in allocation, expenditure and utilization of budget for the family planning services in the state of Bihar during the period of 2009-10 to 2013-14. An in-depth analysis of budget allocation and expenditure was done for identifying the reasons for the gap between budget allocation and expenditure. The study also analyzed the factors affecting the utilization of funds with special focus on the spacing methods.

A mixed method approach was used. This consisted of review and analysis of secondary data, along with a qualitative analysis of in-depth interviews with various actors in the health system, to understand the expenditure pattern and issues related to fund utilization at state and district levels. The quantitative analysis was based on a detailed budget and expenditure tracking analysis of the treasury budget and society route (NRHM). The district budget analysis was done in four out of five districts, one each from selected four divisions of the state. The districts were Patna, Darbhanga, Jamui and Kishanganj. In-depth interviews were conducted with key officials at the state, district and block levels of five districts ─ one district each from selected five divisions of Bihar ─ Jamui, Darbhanga, Patna, Kishanganj and Saharsa. The main focus of the qualitative interviews was to understand the issues in utilization of funds, timelines in receiving and disbursing funds, bottlenecks in expenditure, understanding of financial guidelines and spending priorities at district and block levels.

← Baseline Study on Access to Medicines in Uttar Pradesh Longitudinal Panel Survey on Rashtriya Swasthya Bima Yojana (RSBY) Scheme in Kerala, Round I and II →